TAMPA, Fla. — Kymeta said Sept. 7 that it successfully tested its Kymeta u8 broadband terminal on OneWeb’s low-Earth-orbit constellation, achieving 200 megabits per second (Mbps) downlink speeds ahead of the network’s partial launch this year.

Neville Meijers, Kymeta’s chief strategy officer, told SpaceNews that its electronically steered flat panel antenna is currently serving undisclosed customers in geostationary orbit, but aims to be ready for OneWeb’s mobility customers by the middle of 2022.

OneWeb is nearly halfway through deploying an initial constellation of 648 satellites, targeting government and enterprise verticals including aviation, maritime and backhaul.

The operator plans to launch partial services in the Northern Hemisphere in the coming months, with full global services coming later in 2022.

It is working with a portfolio of antenna companies. South Korean antenna maker Intellian Technologies and Collins Aerospace, a subsidiary of Raytheon Technologies, unveiled a briefcase-sized user terminal Aug. 24 for OneWeb called OW1.

According to Meijers, Kymeta has advantages in mobility applications, pointing to how its u8 terminal can connect to satellites in GEO and LEO, in addition to terrestrial cellular LTE networks for improved resiliency.

“Our sweet spot is really about mobility,” he said.

“Mobility for the DoD, government, first responders, maritime — the whole move to always having communication, whether you’re on a train, a bus, supporting remote mining and agriculture. That’s really where we see ourselves being differentiated from other terminal manufacturers.”

As well as achieving 200 Mbps downlink speeds through repeated testing, they said the single aperture u8 antenna achieved more than 40 Mbps of uplink speeds. 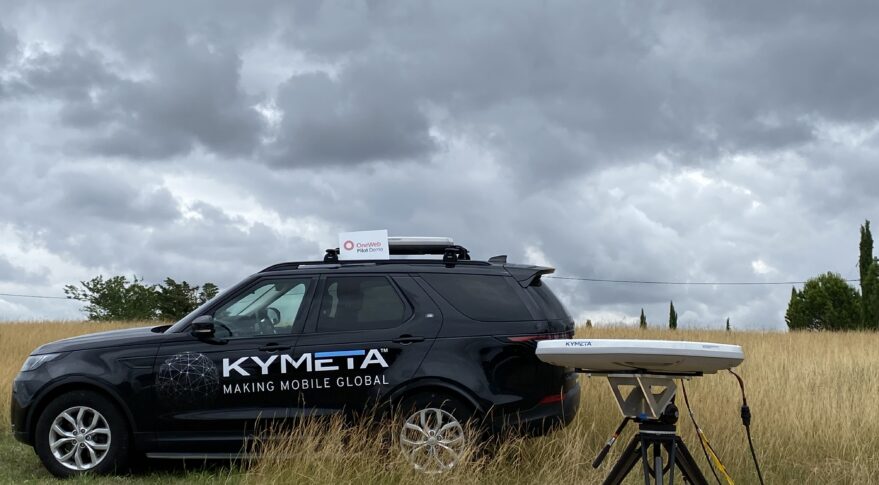 Although Kymeta’s u8 is already in production for GEO customers, Meijers said the company is feeling the effects of the shortage because it buys components in advance of future needs.

“There are component shortages,” he said.

“We [do] look for potential alternative components, but we have managed to develop a pretty robust supply chain. And so we have a platform today that is pretty well served.

“Not to say that we aren’t impacted like everybody else’s supply shortage, we’re just managing that really, really carefully so that we can actually produce antennas and terminals and distribute them to the market, and so far so good.”

Meijers said Kymeta is talking with supply chain partners about ways to “buy forward in higher quantities” to meet demand it expects to see from OneWeb and other LEO constellations coming to market in 2022-2023.

“We’re working actively with our supply chain, and that supply chain shortage is not going to be forever,” he added.

“It is a glitch as a result of COVID, but it is also likely to correct itself at some point in the near future, and so I’m confident that we’ll be able to ramp up time to meet the needs of the market.”

Kymeta also announced Sept. 7 the appointments of Douglas Hutcheson and Walter Berger as co-CEOs of the company, effective from September.

Both joined Kymeta May 21, 2019, following the departure of founder and former CEO Nathan Kundtz.

Hutcheson was executive chair of Kymeta — which covered CEO responsibilities — and Berger was the company’s president, chief financial officer and chief operating officer.

After the latest appointments, Hutcheson is executive chair and co-CEO, and Berger is president and co-CEO.

“The board recognizes Walter’s outstanding contributions as COO and it is with great pleasure that we announce the added responsibilities of co-CEO where we can further accelerate the progress of Kymeta,” Hutcheson said in a statement.

“It has been a great pleasure to work with Walter again over the past nearly two and half years and we are excited to formalize the very effective working relationship between the two of us, the board, our customers, and the Kymeta team.”